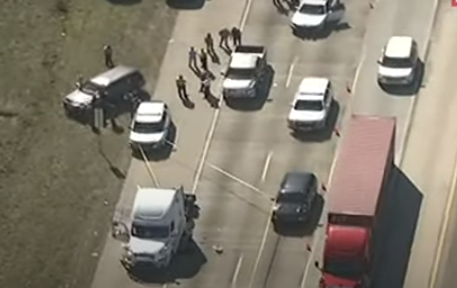 A man in a stolen tractor trailer Is shot multiple times by Coweta County deputy after refusing to stop the stolen vehicle. Authorities said that he led them on a car chase on I-85 Tuesday afternoon.

According to the sheriffs’ office, the tractor- trailer was located through electronic tracking. The tractor- tailor strike several cars trying to escape as Office attempted to stop the stolen vehicle.

“The stolen vehicle did not stop, and in the ensuing pursuit, swerved to strike multiple innocent motorists,” a Coweta County Sheriff’s Office release said. “Due to the immediate threat of life to civilians and law enforcement personnel, CCSO Deputies used deadly force during the chase to disable the vehicle.”

According to the Georgia Bureau of Investigation, the driver was taken to the hospital and had no life-threatening injuries.