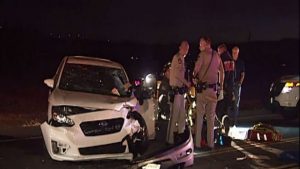 There is never, ever an excuse for drunk driving. So many innocent people lose their lives because others make an irresponsible choice. These deaths are entirely preventable, and that makes it all the harder to accept. Even for drunk driving victims who manage to survive their accidents, the repercussions can be serious and may last for a long time. When drunk drivers get behind the wheel, they recklessly take strangers’ lives into their own hands, and they ought to be held accountable for doing so.

An October 2018 CBS reports that a “ woman was arrested Sunday evening on suspicion of felony DUI after she was involved in two accidents”.

When you start crunching the numbers, you can quickly come to a chilling realization about the frequency and severity of impaired driving in The Peach State. It happens in big cities and small towns, on back roads and major highways alike. Consider the following:

As the Georgia drunk driving accident lawyers, T. Madden & Associates, P.C. are dedicated to getting justice for the victims of DUI accidents and injuries, as well as for their families.

We are here to lend a shoulder of support and experienced hand for guidance. We want to be your voice – a voice with which you can speak up and confidently demand true justice. We want to maximize your compensation and deliver you as much as money as possible.

If you or someone you love has been injured or killed in a drunk driving accident in Atlanta, Savannah, Augusta, Columbia, Jonesboro, or anywhere else in Georgia, our attorney team can help. You and your family may be entitled to much more than you realize. Please give our office a call right away.