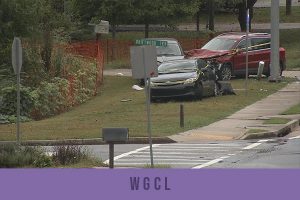 Car crashes in Georgia are a regular and tragic occurrence. Wrecks can happen anywhere, and at any time, often with very little warning to the victim. They happen at high speeds and low speeds, on congested city streets and in parking lots, on public property and private property. In most accidents, though, the root cause is careless driving.

CBS46 reports “a crash involving three vehicles”, which happened at the “ intersection of Midway Road and South Candler Street in Decatur.” Police said “a vehicle was stopped at a red light at the intersection when another vehicle crashed into its rear end. The crash pushed the vehicle into the intersection causing it to be struck by a third vehicle.” The police also reported that “A 5 year-old child was inside the vehicle and was unresponsive when medical personnel arrived. The child was taken to an area hospital with critical injuries.”

Georgia only has a few big cities, but they’re so big – and have so much traffic – that car crashes are a regular and tragic occurrence. The law holds negligent drivers and their insurance companies financially liable for the damages that they cause. Yet, all too often, the accidents happen, and the insurance companies in this state are all too happy to take those drivers’ money, promise to insure them, and refuse to pay when the time comes. In fact, it is now common practice in this country for insurance companies to default to a “deny and defend” policy, which means that they automatically shortchange or altogether deny injury claims, often without even conducting a real review.

What Are Some Legal Options for the Victims of Auto Accidents?

Insurance companies figure that the victim’s will have to sue them to make them pay, and they are betting on the fact that many victims won’t hire a lawyer. They are right about that – a lot of accident victims mistakenly assume that they can’t afford a car accident and injury lawyer, or that they don’t have much of a case. Please do not make that mistake. You can afford a lawyer. In our office, everyone can. How do we know? We do not charge attorney’s fees for our services unless and until we recover compensation for our clients. You don’t pay us unless you get paid, too.

We find that clients are often surprised to learn that they are legally entitled to more money (sometimes much more) than they realized.

We have helped numerous crash victims recover substantial monetary settlements or verdicts after Georgia car accidents. We’ve also helped many grieving families recover money in a wrongful death action after the tragic loss of a relative. We want to help you, too. If we think we can, we’ll ask you to trust your case in our capable, caring hands – and then we will immediately go to work, with the unflinching goal of getting you as much money as possible.

We’ll listen to your story, look at the facts of the case, and help you decide whether legal action might be worth pursuing. Contact TMAPC (https://tmaddenlaw.com/).