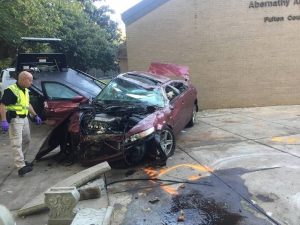 Sandy Springs Police Department are investigating the accident of a 31 year old driver who flipped her car and crashed into the Abernathy Arts Center on Wednesday morning. The driver, Zahide Rodriguez, was traveling east on Johnson’s Ferry Road when her Acura hit an embankment. According to Sandy Springs police Spokesperson Sergeant Sam Worsham, the car become airborne and crashed into a tree and lamppost before landing on its roof. There were no other cars involved.

Ms. Rodriguez was hospitalized for moderate injuries and is said to be stable. Channel 2’s Steve Gehlbach spoke with Laura Martin, the Abernathy Arts Center manager.

“We were shocked to see it this morning and just hope that she’s OK, that the driver is OK,” Martin said.

It’s not the first time a car has come off the same curve and nearly hit the property. Police reports from the end of May reference a driver who flipped his Jeep near the Arts Center. The was arrested on suspicion of a DUI.

“We’re lower than street level, so you could definitely get some speed coming off that sidewalk,” Martin said.

The Abernathy Arts Center hopes that this incident will not impede preparations for their local arts festival which will be held this weekend.

The local police are charging Ms. Rodriguez with failure to maintain lane in connection to the crash.

Georgia only has a few big cities, but they’re so big – and have so much traffic – that car crashes are a regular and tragic occurrence.

T. Madden & Associates, P.C. is an aggressive Georgia personal injury law firm serving the cities of Atlanta, Augusta, and the many towns and cities that surround them.

We take a proactive, compensation-oriented approach to auto accident litigation. In other words, we fight to get you money, and we fight hard.

Dangerous drivers are everywhere. The insurance companies in this state are all too happy to take those drivers’ money, promise to insure them, and then refuse to pay when the time comes.

In fact, it is now common practice in this country for insurance companies to default to a “deny and defend” policy, which means that they automatically shortchange or altogether deny injury claims, often without even conducting a real review. They figure that you’ll have to sue them to make them pay, and they’re betting on the fact that many victims won’t hire a lawyer.

They’re right about that – a lot of accident victims mistakenly assume that they can’t afford a car accident and injury lawyer, or that they don’t have much of a case. Please don’t make that mistake.

We want to help you, too. If we think we can, we’ll ask you to trust your case in our capable, caring hands – and then we will immediately go to work, with the unflinching goal of getting you as much money as possible.

You can afford a lawyer. In our office, everyone can. How do we know? We do not charge attorney’s fees for our services unless and until we recover compensation for our clients. You don’t pay us unless you get paid, too.

We’re happy to offer you a free case consultation. There’s no charge and no obligation, just honest feedback to help you make a decision and understand your rights.

What Should I Do after a Georgia Auto Accident?

If you’ve been in a vehicle accident in The Peach State, pick up the phone and call the experienced Georgia auto accident attorneys at T. Madden & Associates, P.C. (or simply contact us online).

We’ll listen to your story, look at the facts of the case, and help you decide whether legal action might be worth pursuing. We find that clients are often surprised to learn that they are legally entitled to more money (sometimes much more) than they realized.

Never settle for less than you deserve. You might be entitled to significant financial compensation, and it won’t cost you anything upfront to pursue it. Remember: You don’t have to pay us unless we get you money! There’s really nothing to lose. Isn’t it in your best interest to at least talk it over with our office before you make a decision?